Add to Wishlist
Skip to the end of the images gallery 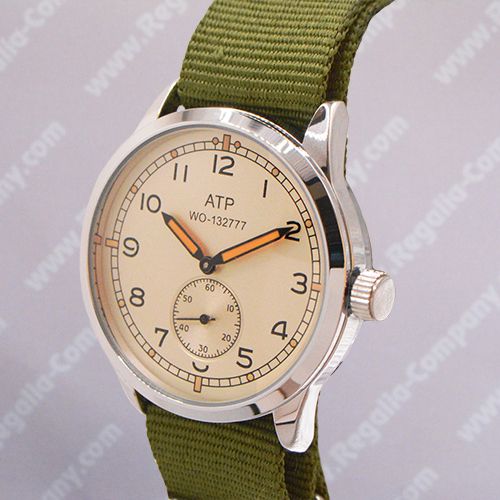 Skip to the beginning of the images gallery

This stunning British A.T.P (Army Trade Pattern) Watch is a replica of the original watch, the precursor to the highly sought "Dirty Dozen" watch.


This watch features a separate seconds dial, glow in the dark hands and hour markers. It has a sleek silver face, marked with A.T.P. and a serial number where on the the 17 original Swiss manufacturers would have placed their name. The obverse is stamped A.T.P with the same serial number 132777. Around 130,000 of these watches were produced for use during the war making them one of the more common service timepieces, but that doesn't detract from their utilitarian beauty.


These are a must-have for enthusiasts, reenactors and collectors.


The watch features a dual quartz movement, battery operated, with a second hand that 'ticks', rather than sweeps. The crown pulls out to adjust the time, and features a full Hacking function. The green NATO strap allows adjustment to fit any wrist, and the watch itself is 3 ATM waterproof, so splash and rain resistant, great for daily life, but don’t go showering, swimming, or deep-sea diving while wearing it!


Each watch comes with its own branded silver coloured box, measuring 26cm x 9cm x 2cm, with a slide-out drawer that displays the timepiece against a sleek black felt padding.